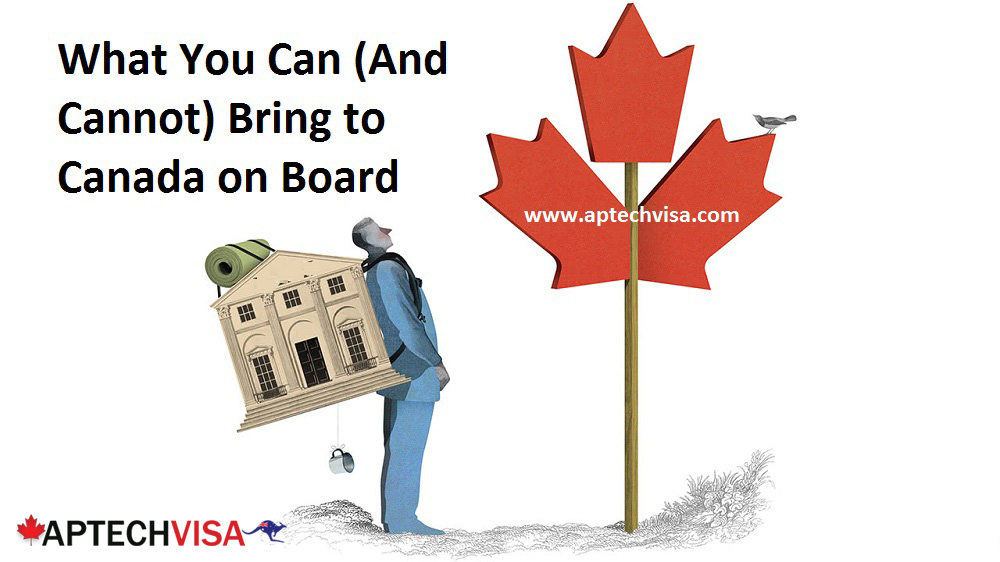 What you can (and cannot) Bring to Canada on Board

The extra-excited passengers, permanently moving to Canada are sometimes, in a hassle or over-ride of enthusiasm, brings in some prohibited goods along. Other than the Indian sweet delicacy (Ladoos) or Pickles of season veggies (achaar), there are few things that are barred on the flight. Thus, it can be of great inconvenience to shuffle your luggage and leave your possessions with the airport staff.

Here is the list of things you should (and shouldn’t) carry along to skip the annoyance you might get to face during airport check-ins:

Camera and other similar portable electronic devices like tablets, e-reading devices, etc. are allowed to be carried on the airplane. Your cell phones do not fall under this category, though, cell phones too, are allowed in airplanes.

The only thing to take care of is to switch off your phones or operate at flight mode (as also instructed during flight).

Alcohol and related substances are free to be taken with, provided you comply with the ‘limit’ prescribed to it.

Maximum of 5 L of alcoholic beverages is allowed to be carried.These must contain alcoholic volume between 24 and 70 percent as mentioned on the retail packaging.

There is no restriction on alcoholic beverages having 24 percent alcohol or less.

Any blunt object (more of a weapon type) which is considered as’ illegal to be in possession’ as per the Criminal Code of Canada, is not allowed to be taken away to Canada.

These too falls under portable electronic devices, like camera and are completely fine to be taken with on board.

There are no restrictions whatsoever in association with carrying laptops and portable computer systems on flight.

You are allowed to take an Avalanche Rescue Backpack with permission of your Airlines. There is no restriction as such in carrying this object to Canada.

You are allowed to take e-cigarettes on the board. However, with a condition.

You cannot use (smoke) e-cigarettes while in the flight, nor are you allowed to charge them.

The pair of batteries in fact has to be kept separate and safe so as to avoid any short circuits.

iv) The weight of the pack must not be more than 2.5 kg

CPAP stands for Continuous positive airway pressure and is a respiratory device as medically suggested to combat breathing difficulties.

The device contains distilled water and is absolutely permissible and free from liquids exemption.

The individual can carry the device in either of these forms:

i)  Bring a plastic bag, place the device inside and get it passed through screening

No dangerous/ hazardous goods are permitted on board as well in Canada such as acids, compressed gases or any harmful chemicals).

Any kind of explosives are strictly prohibited to be carried during a flight. These includes all types of detonators, fireworks or ammunitions.

These can be a threat to airlines as well as to people in Canada and therefore are forbidden to be carried.

Yet another category under Portable electronic devices. You can carry gaming consoles as your wish without any restriction being placed on it.

You can carry boxed cartridges weighing not more than 5 kg. These boxes are mandatorily be non-explosive and non-incendiary in nature.

Any weapon, as mentioned earlier too, is prohibited to carry on board. Apart from serious and real Guns, firearms and other weapons; any look alikes such as toy guns must also not be carried along.

Liquids, gels and aerosols are perfectly fine and allowed to be carried on board. These are accepted in fixed containers of 100 ml to 100 gm in a clear container/ bag which has the capacity to hold about 1 litre of liquid.

Breast milk and baby mixtures are allowed to be carried in any size of plastic bags.

Any heat producing article is allowed to be carried provided the batteries are removed and kept separately (due to chances of short circuits while on board). Such heat producing device includes underwater lamps, hair heat products, etc.

It may sometimes requires you to take permission from your airline.

All the pointed or sharp objects (from edges) are not allowed while on the board. Examples are pointed bows, cutters, edged swords, etc.)

If your airplane is having 30 or more passenger seats, then you are permitted to take service animals along. Such trained animals will be kept in cabins and not among passengers in the flight.

18) Wheelchairs and other battery-aided moveable devices

You are free to make arrangements and take wheelchairs and other such battery-aided portable devices with you on the flight and to Canada.

You need to make such arrangements beforehand/ in advance by communicating your need to the airplane.

If there are some specific kind of products/ devices/ objects that you wish to carry along, then get in touch with us to know detailed permissible limits while on board to Canada.

Hello Aptechvisa Team, Just wanted to say that till now I have received excellent and seamless service from Aptech. Kudos to you guys for being so ...Read more

Hi Aptech team, This is formal submission of WES  feedback from my side. I got to know about Aptech from Google. After reading various positive ...Read more

Hi, I am Syed Rafic Qadri and I am an Indian Citizen and I am currently working in Abu Dhabi. I am an expert Technologist in the area of Database Ad ...Read more

Hi Monika, My overall experience so far has been very positive and satisfying. You have been quite helpful at all stages of the process so far, i exp ...Read more

Dear Ma'am, It was overall good experience with your entire Aptech team till my educational assessment procedure.   I have got a positiv ...Read more