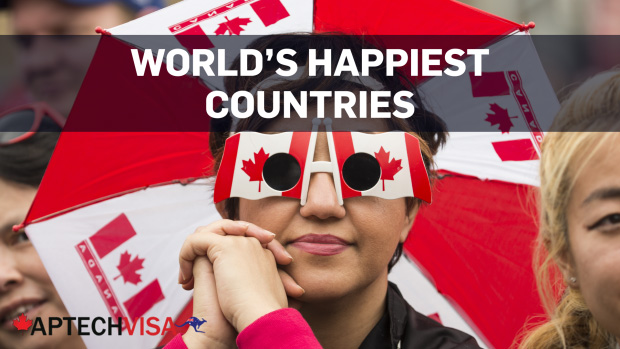 Canada Among ‘Happiest Countries’ Around the World

The World Happiness Report, 2018 published recently on 14th of April has announced Canada in the Top 10 ‘Happiest’ nations in the world. In fact, the prominent feature of the report was the correlation between the immigrants’ happiness levels and the indigenous Canadian population.

Based on factors such as GDP, Life expectancy, social freedom, corruption-free, etc., Finland has been called the top happiest country. Last year, the list has Norway as the happiest country and Finland used to be at the fifth place back then.

The least happy country among 156 total countries ranked in the report, is Burundi.

The country of dreams- US, UK and UAE are not present in the top 10 of the countries despite the best backed up in technology and services at public disposal. The main reason could be increasing obesity and drug intakes.

The top 10 countries as published by the Report are:

Immigrate to a Happy Canadian Economy!

Canada has always been immigrant-friendly. The accommodation of immigrants are such, that more and more Indian families now have established localities, Interest groups, clubs, etc.

Canada’s happiness portion has been called to double ever since Prime Minister Justin Trudeau took his position. The Minister has promoted immigration ever since bearing the office. Canada’s city of Toronto (Province: Ontario) has been the attractive ‘lure’ to skilled candidates and record number of immigrants migrate to the city every year.

Being the country of best schools, best universities, technologically progressive and light population of different cultures and ethnic groups, Canada’s economy is not only ‘happy’ but well-settled and on the right path of development.