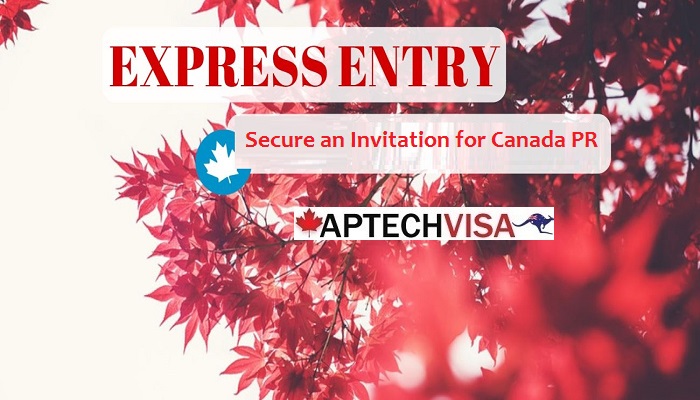 How to Secure an Invitation for Canada PR?

As you already know that to apply for Canada skilled migration visas, every applicant has to have good CRS score based on many different elements like age, work experience, educational qualification, language proficiency and adaptability. The candidates are then placed in the express entry pool and top ranked applicants are selected through CIC draw to apply for Canadian permanent residency.

A minimum of 400 and above CRS are required for direct ITAs from the Canadian government. Anything less than 440 CRS would not give you direct ITAs and you may have to take the route of Provincial Nominee Programs.

Provincial Nominee Programs are specialized programs individually designed for each province to nominate the potential applicants. Some of the provinces are also linked to the Express Entry Program.

In this blog, we would try to understand the best possible ways of securing an invitation from the Canadian government for permanent residency!

How a PNP Affects Your CRS Score?

There are several reasons that can constitute your Comprehensive Ranking System Score through Provincial Nominee Programs.

An applicant who gets a provincial nomination from any of the provinces receives 600 additional points! Yes, you heard it right! 600 points that further boosts your immigration chances for Canada PR. Say, for example, you are under 29 years of age and have 110 points, French speaking gave you 30 points and provincial nomination gave you 600 points and so on. This means that apart from your own CRS score, you also have 600 additional points that makes you ahead of most of the candidates, essentially guaranteeing you an Invitation to apply!

Here are few more things that can help you in securing an invitation to apply for the Canadian permanent residence.

As discussed earlier, each province has their own individual needs, and the Express Entry requirements linked to each province or territory will be made to suit those needs. Also, there are some similarities among these programs, but also some significant differences that may help you decide if you want to apply for a PNP and the beat possible PNP to go for!

There are many provinces of Canada that does not require immigrating to Canada without job offer letter while some do require. Every province has its own eligibility requirements to nominate the applicants on point based immigration factors.

Predominantly, there are two ways of selecting applicants under Provincial Nominee Program:

There are some provinces that only require you to have your profiles in the express entry pool like Prince Edward and Nova Scotia. You must have a relevant point assessment score on the factors like age, educational qualification, work experience, language ability and adaptability.
If the particular provinces like your profile, they will send you an invitation to apply for the same.

The provinces under Expression of Interest are only open to candidates that express active interest in the specific program. Each province has a specific scoring system which is made to suit the needs of the province and dynamically changes according to the province’s needs.  Some of the participating provinces don’t necessitate a job offer to nominate a candidate

EOI is exactly like Comprehensive Ranking System; here the applicants receive notification of interest instead of ITAs. The applicant must score a desirable score that makes them eligible for Canada PR.

Manitoba follows Expression of Interest system. A candidate must fulfill all the standard Express Entry demands, as well as prove the support of a close friend or relative who has resided in Manitoba for at least 12 months, or have a valid invitation from the Manitoba PNP.

Saskatchewan Province is also a new entrant of EOI system. Earlier it followed ‘First Come First Served basis’ to nominate the applicants bit with EOI, there are chances of more number of applicants getting invitation to apply.

Check Your Eligibility to Migrate to Canada

One may wonder, these eligibility requirements less worthwhile as it increases the burden but it is a boon to the candidates who otherwise are not invited to apply. For example, someone whose CRS score is lower than the minimum for selection in the general Express Entry pool might have a significantly higher score if they can secure the support of a family member in Manitoba, and have a great chance of getting nominated through this PNP.

Lastly, it is not important to have a job offer to apply for Canadian permanent residence however having one may make you eligible for any of the PNPs where job offer is essential or it can also add huge advantage.

One thing is confirmed that a job offer can add up to 200 CRS points to your overall point score in the specific provincial ranking system, putting you far ahead of candidates with no job offers

For further queries related to Canada PR, it is suggested that you fill the free assessment form and the visa experts of Aptech Global would contact you to discuss your immigration case for Canada.

Hi Aptech Team, I would like to give a written feedback about my experience with your team. We have been trying to get through Canada Pr proce ...Read more

I really appreciate Aptech team and specially Manpreet for constantly giving us updates on each and every step of immigration process.  Sh ...Read more

Hi, One of my aspiration is to get the resident visa for New Zealand, and for that I have approached Aptechvisa . Manpreet is taking care of my ...Read more

Dear Manpreet,   Thanks for all the help so far. Initially when I started the process I was confident, however after the pandemic I was a ...Read more

Hello Aptech, Thank you for your mail. I am really happy with your customer service and your speedy response.  Aptech has been very profe ...Read more

Potential Reasons why Your Australian PR Visa Gets Rejected

Potential Reasons why Your Australian PR Visa Gets Rejected