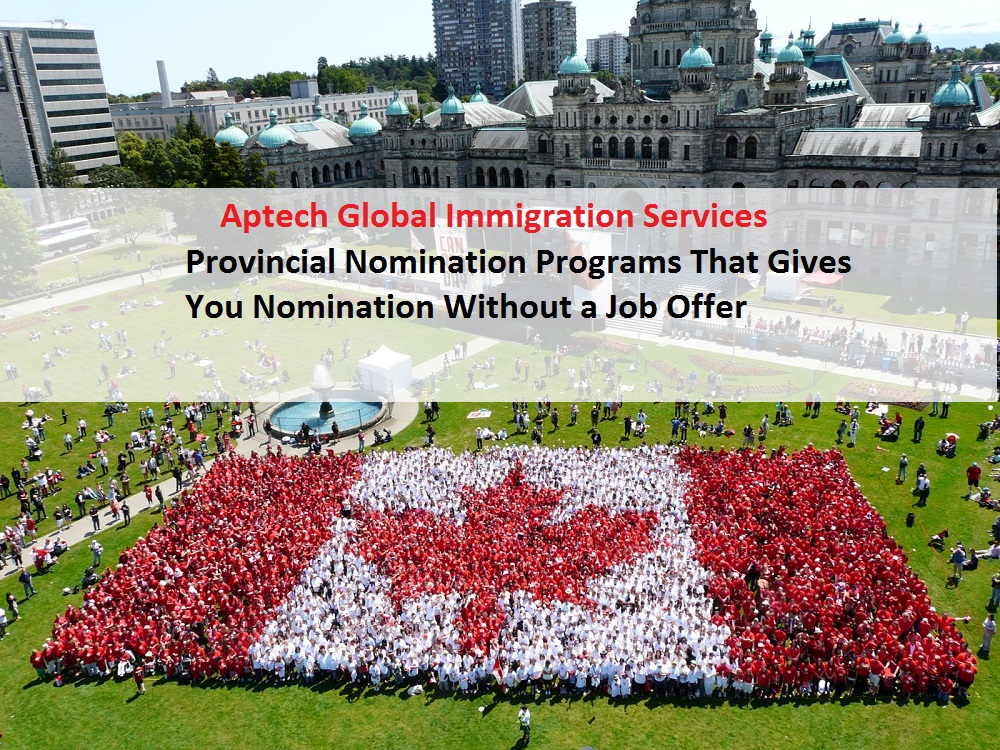 Provincial Nomination Programs That Gives You Nomination Without a Job Offer

Canada’s bounteous land is divided into different big and small provinces. Each of these provinces are having their very own Provincial Nominee Programs (PNPs). PNPs are programs introduced and controlled by Provincial Government(s)of Canada. Different provinces are having different set of requirements attached to their Nominee Program. For instant, province of Manitoba requires you to have a relative living in Canada either as a Resident or a Citizen, while province like Saskatchewan needs minimal requirement at every front be it ILETS bands requirements or total immigration score.

One common trait which is there in the eligibility set of (almost) every PNPs is having a valid Job offer letter from an employer of that province. Barred, there are few exceptions too.

There are two provincial nomination programs that need not require a Job offer letter in order to nominate you for Canada PR.

Let us detail these PNPs:

While the first category requires the candidate to be already present in the Express Entry pool in order to get nomination; the latter does not need to have so. You can apply independently under skilled worker occupation-in demand list stream of SINP.

Nova Scotia Provincial Nomination Program has an active stream of Express Entry i.e., Express Entry aligned stream. To be eligible to get nomination under this provincial program too, you need to have your Express Entry filled and in the pool among other candidates. Nomination will be given to you based on this EE profile only. find out nova scotia PNP.

One of the Stream under Manitoba Provincial Nominee Program need not required a Job offer, but only a sponsorship will from a relative currently residing in Canada.

Such relative has to be: Manitoba PNP

c)     Willing to sponsor you to Canada

Not having a Job offer and looking to migrate under PNP, Canada? These options are your disposal. Know when their respective quotas are going to get open.